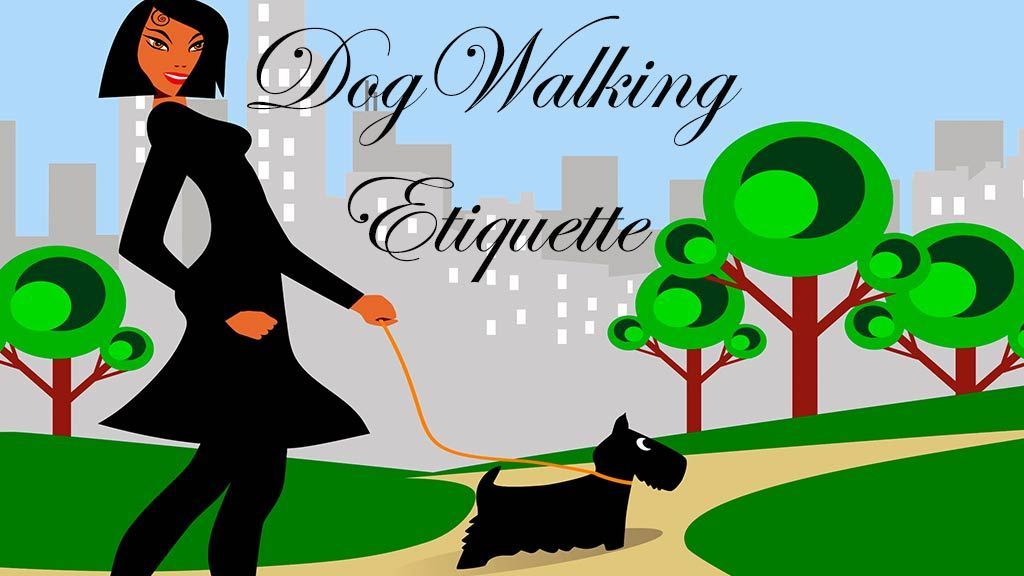 Don’t be a leash holding bore!  Let courtesy be your guide when walking your pet about town.

Clean Up After Your Pet

We have a theory that all the mess we find on the streets is from pets whose owners planned for one less deposit than actually occurred.  It is not uncommon for pets to have two and sometime three ‘stops’ on their walk, so be prepared.  This great leash-attached baggie holder is excellent because it means that you are never without the clean up tools you need when you are out with your pet.  Oh, and just so you know, the current mayoral administration is crapping down…errr CRACKING down on owners that don’t clean up after their pet. Under the provisions of NYC’s Canine Waste Law, any NYC official with the authority to issue tickets (police officers, meter maids, sanitation workers) can write a ticket to pet owners caught not cleaning up after their pet.  The fine can be as high as $250 dollars, so pick up or pay up!

Ask Before Introducing Your Pet

Especially with the current flu outbreak!  You and your pet may be eager to say hi, but not all others share your outgoing, good nature.  Also, pet owners may be hurrying to walk their pet before they have to leave for work. An introduction to you and your pet will only delay him or her more.  When approaching another pet, ask the pet owner if it’s okay for the dogs to stop and greet.

Give Berth To Other Pedestrians

Keep a short space between you and your pet; otherwise, between the two of you and the leash, you can create a barrier that prevents others from getting around you.  In a city of 8 million people, hogging the sidewalk is rude.  Be sensitive to the needs of others trying to pass.

Remember That Not Everyone Loves Dogs

So be respectful of their feelings.  Some people are terrified of dogs; others find them dirty or gross.  It’s not for you to judge.  Ask permission before allowing your pet to smell, lick, or approach a pedestrian.

Public Spaces are for People

Do not allow your dog on outdoor tables, benches, or chairs that are made for people. Do not allow your dog to drink out of public fountains.  Many pet owners think of dogs as family, but that doesn’t mean than non-pet owners share the sentiment, nor should they have to.  Dogs that walk on the street and then are allowed on tables and chairs can communicate pathogens to humans.  Your dog can lie or sit on the ground next to you; he’ll be fine.

We think it’s cute, but others looking for a place to sit in a world with too few seats think it’s rude. Besides, look how many spaces this dog is hogging!  We give this pet owner a thumbs down in the etiquette department. What about you? Share in the comments section below.

Some store keepers love dogs and will try to give your pet a treat from behind the counter.  What they are doing is training your dog to jump on allcounters in search of a treat.  Be mindful of this.  Some people do not appreciate dogs on counters or even in stores for that matter.  If the sign says no dogs, then obey the sign.  If people want to give your dog a treat, tell the kind person that you are trying to train your pet to sit before receiving a treat, not jump, and direct their actions accordingly.

Keep Tight Control Of Your Dog

Many dogs are okay with saying hi, but some can feel overwhelmed if the introduction comes on too strong.   As you know, dogs are also used to saying ‘hello’ to the wrong end and can quickly tie themselves up in their leashes as they circle about to investigate the other dog. Learn to stop before other dog walkers with a leash’s worth of lead between the two of you to prevent fights and tie ups.

Dogs are learning a lot about one another in a quick period of time.  One dog may be all a pet can handle at a given time.  If you approach two dogs greeting one anther, it’s best to pass them both by and meet again during another outing.

New To the Neighborhood? It’s Okay To Be Standoffish.

Your dog may be insecure about the other dogs living in your new digs.  He or she can learn plenty of who’s who without a formal face-to-face meeting.  On walks through your new lobby and in your neighborhood, your dog is picking up a multitude of scents and cues from other animals that live close.  Allow your dog to explore these first and to see other dogs from a distance as a way to slowly acclimate him or her to others that may be living near.

Don’t Assume That the Dog Walker Is the Owner

You know your dog well, but that doesn’t mean that the other walker knows his.  He may be clueless as to how the dog (or dogs) he has on the leash will behave with your dog.  Best to tip your hat and keep on walking.

It seems like the majority of dog owners ignore this obvious rule of etiquette and it’s too bad.  Some people go to great lengths to plant shrubbery around trees or in their front gardens.  To allow your dog to urinate on such plantings is plain rude and a health risk for transmitting diseases like Leptospirosis.  When walking your dog, keep him or her pulled towards the curb of the sidewalk where is can drain into the sewer system during sidewalk or street cleaning.  As an aside, do you know why urine kills plants?  Urine is high in nitrogen, an element that in small doses is a great fertilizer, but in large doses burns sensitive plant root hairs.